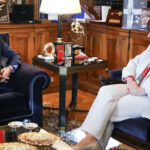 Prime Minister Kyriakos Mitsotakis met with the President of the Republic, Katerina Sakellaropoulou, at the Presidential Palace on Friday morning. The prime minister informed the Greek President about the course of the economy focusing specifically on the issue of banks. “They must take their share of responsibility”, stressed the prime minister, adding that “banks must support vulnerable households as a whole, as they have high profitability, so we can prevent a new generation of bad loans”.

At the same time, the prime minister referred to the issue of low-interest rates on deposits, but also the high commissions in some transactions. Kyriakos Mitsotakis expressed the hope that the discussions will lead to an agreement. “I am confident that we will reach a positive solution for borrowers and depositors but also for the same banks that have been heavily supported,” he said.

According to sources, the PM is reportedly annoyed with the financial institutions’ stance believing they should adopt measures and contribute via their large profits to the economic hardships instead of burdening the Greek taxpayers through the state budget.

The government has requested, among other things, from the banks: support for vulnerable borrowers, an increase in the approval of out-of-court mechanism applications, a reduction in interest rates on loans, and a “brake” on the cost of commissions for simple banking transactions. At the same time, he has legislated: No bonus for high-ranking bank executives for 2022.