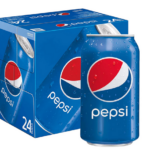 The beverage wars have always been fierce between rivals Coca-Cola and PepsiCo. But they’re raging this year now more than ever before, with Pepsi reformulating its sugar-free soda to taste less diet (and promoting it heavily ahead of Super Bowl LVII) and Molson Coors introducing its own zero-proof, fizzy canned drink.

It may seem like every time you go to the grocery store or gas station there’s a new drink on the shelf. Upstart beverages beloved by Generation Z (the age demographic born after 1997) love new fizzy drinks like Poppi, a healthy probiotic soda with zippy branding. No surprise Poppi is now worth billions.

Hunter Biden asks judge to stop his 4-year-old daughter, who he had with a stripper, from taking his surname

But PepsiCo has had less luck at targeting a younger generation with what’s previously worked on older ones. Gen Z famously drinks less soda, and large beverage conglomerates are working to move away from less-sensitive branding that uses words like “diet.”