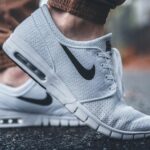 Nike vs. Adidas – Who sells more sneakers in the World? (infographic)

Contrary to what their name might suggest, basketball, tennis and running shoes are in no way confined to courts and tracks these days. Athletic footwear, less formally known as sneakers, can be found anywhere from boardrooms to fashion runways, and companies such as Nike and Adidas are making billions feeding the sneaker frenzy.

With footwear sales of $28 billion in the fiscal year ended May 31, 2021, Nike is the clear number 1 in the global sneakers market. Having started as an enterprise licensing Japanese running shoes for the American market, Nike quickly developed a name of its own in the 1970s when some of the company’s most iconic silhouettes were introduced.

Interestingly some of the models released in the 1970s are still among Nike’s most popular shoes today. The sneaker market is probably unique in the way it’s constantly moving between innovation and nostalgia, with shoes designed in the 1970s and 1980s still selling equally well or in many cases better than shoes featuring state-of-the-art technology.

In case you’re wondering why popular brands such as Vans or New Balance are not included in the chart: these are owned by private companies that aren’t obliged to publicly report sales figures.