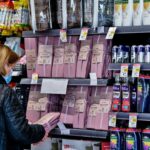 The new explosion of inflation last April is due to the energy crisis and especially to the price increases of 88.8% in electricity (on an annual basis), which has the most significant impact on the index, followed by natural gas with an annual increase of 122.6%. and heating oil by 65.1%.

Prices for new cars increased by 8.9% and used cars by 11.5%. Overall, there is an increase of 15.4% in the Transport sector, mainly due to the increase in prices of new cars, used cars, mopeds-motorcycles, tires, fuel and lubricants, passenger transport tickets by plane. The sub-index of housing and food shows a significant increase of 35.2% and 10.9%.