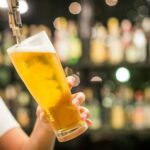 Some countries love drinking beer while others are more inclined to supply the rest of the world by exporting their brews. Again others are gladly accepting this offer as they seem to prefer imports over domestic production.

China, Canada, and Italy stand out for their high imports of hoppy drinks, while Belgium and Mexico rank toward the top of the biggest beer exporters. Baltic nations Estonia and Lithuania as well as their Eastern European neighbors Poland and Romania are some of the biggest consumers of beer in the world together with Austria and Namibia.

But there are also countries that fall into more than one of these categories. The Czechs are Europe’s undefeated beer kings as they are the biggest consumers on the continent and still have more to share around in exports. Many European nations – namely France, the UK, and the Netherlands – as well as the U.S. import and export a lot of beer at the same time. Germans – world famous for their beer – are even among the top nations in all three categories, mixing it up with high exports and high imports, which naturally also leads to high per-capita consumption.