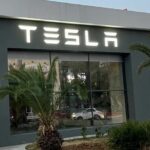 According to reports, the Tesla Model S Plaid, with 1,022 hp will also be at the car showroom, towards the end of the year, the beginning of 2023.